The Shift Of Deixis And Tense In Reported Propositions

As we have seen, a reported proposition typically takes on a set of related features collectively known as ‘indirect speech’. What happens is that all deictic elements are shifted away from reference to the speech situation: personals away from first and second person (speaker and listener) to third, and demonstratives away from near (here-&-now) to remote. A part of this effect is the ‘sequence of tenses’: if the verb in the reporting clause has ‘past’ as its primary tense, then typically each verb in the reported clause has its finite element in the corresponding System II (‘sequent’) form: see Table 7-24. 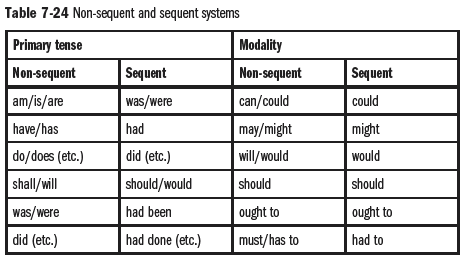 In other words, an additional ‘past’ feature is introduced at the Finite element in the mood structure of the projected clause. The use of the sequent form is not obligatory; it is less likely in a clause stating a general proposition, for example they said they close at weekends. But overall it is the unmarked choice in the environment in question.