In order to explore the difference between [different ways of expressing modality], we should introduce two further variants that cover the same range of meanings. Keeping to the same category of high probability, we will also find expressions such as it is certain (that) that is true and I’m certain (that) that is true. Notice what is happening here. With these last examples, the speaker is explicitly stating the source of the conviction: it is either being said to be objective, as in it is certain ..., or presented as a subjective judgement on the speaker’s part, as in I’m certain that .... By contrast with these, the versions presented earlier [certainly and must] leave implicit the source of the conviction. But they also differ along the subjective/ objective dimension: whereas the adverbial form certainly is a way of objectifying the speaker’s evaluation, the verbal form must carries a subjective loading – it is the speaker’s own judgement on which the validity of the proposition is made to rest. We thus arrive at a matrix of four feature combinations as follows:

These options are present throughout the system; we can therefore rewrite the network for modality as shown in Figure 4-23. 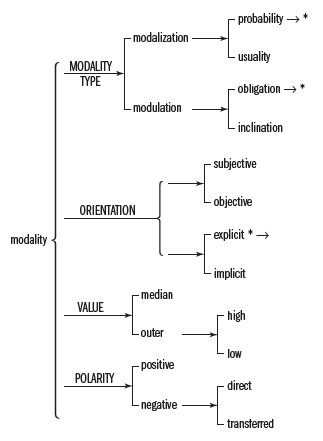