Like ‘middle mental’ clauses, ‘effective’ ones either project ideas within a clause nexus or include fact clauses as Phenomenon, e.g. 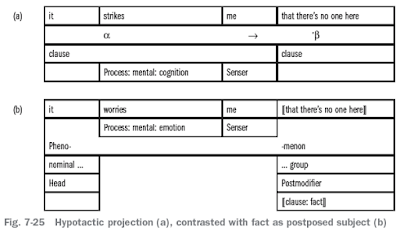 The difference in structure is clear from the intonation pattern. That of (a) corresponds to I rather think there’s no one here, with falling tonic (tone 1) on here and perhaps a separate falling-rising tonic (tone 4) on strikes/think; that of (b) corresponds to it worries me, the emptiness of the place, a compound tone group with tone 1 on worries and tone 3 on here/emptiness, showing clearly that that there’s no one here is functioning as a postposed Subject. Again, it strikes me is a cognitive process clause, and so can project an idea, whereas it worries me is and emotive one and cannot.