There is one other significant variety of nominal group that is construed in the same way, with the Head dissociated from the Thing and the two linked by of, as in a cup of coffee. We noted above that such expressions often figure as agnate to a ‘counted’ mass noun: a new polish/type of polish, three coffees/cups of coffee. These could be regarded as extended Numeratives, the Head being a word of measure or type. They can be represented as a matrix of two variables (see Table 6-11): (i) measure (quantity) / type (quality), (ii) the set relationship of Head to Thing (collective (Head > Thing), partitive (Head < Thing), quantitative (Head = Thing)).

What all these have in common is that, while the Thing is the entity that is functioning as participant in the transitivity structure of the clause, the logical Head of the construction is something that constrains the entity in terms of the two variables mentioned above. It is the Head that determines the value of the entity in the mood system, and therefore as a potential Subject. 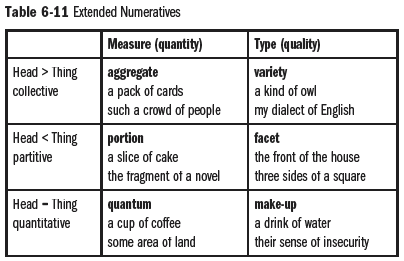